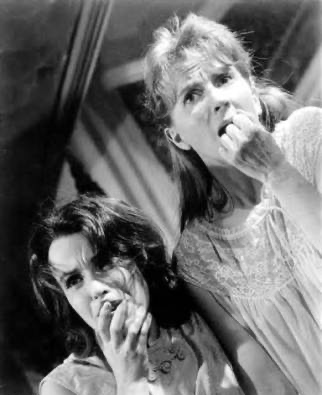 Directed by Robert Wise and adapted from Shirley Jackson's classic novel The Haunting of Hill House, the 1963 film The Haunting is perhaps the ultimate example of less-is-more in horror cinema and one of the signature standards of the Haunted House genre in film.

Eleanor "Nell" Lance (Julie Harris) — still wracked with guilt over the recent death of her invalid mother, for whom she'd been the caretaker — volunteers for a study on paranormal activity conducted by Dr. John Markway (Richard Johnson), along with two other participants: Luke Sanderson (Russ Tamblyn), who stands to inherit Hill House, the empty, decrepit New England manse where the study is being held; and Theodora aka "Theo" (Claire Bloom), a supposed psychic. It soon turns out that Markway's suspicions regarding the existence of ghosts are correct: there's something in the house with them. But what?

Remade in 1999 with Liam Neeson, Lili Taylor, Owen Wilson, and Catherine Zeta-Jones. There has also been a stage adaptation.