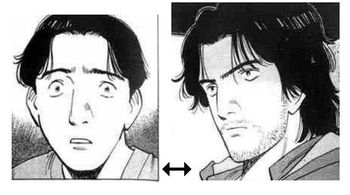 From a squeaky-clean doctor to an atoning monster hunter.
Advertisement:

Sometimes when you have to show something important about a character, it's not appropriate or wise to wheel out the Mr. Exposition and explain what's going on, and in general the easiest way to do this in visual media is to change the appearance of a character, specifically, their hairstyle, since this can be done cheaply in live-action through the use of wigs or other non-permanent alterations and can be undone just as easily. This can also be used to show character development and contrast with the present character, since if the once Funny Afro sporting person is now shaved bald, something may have happened to induce the change as part of their Back Story.

The addition of stubble on a male character is often used to show that they've either gone badass, have gone through a rough patch emotionally or just had more important things to do than shave. Likewise, the sight of a usually picture-perfect woman with waist-length disheveled hair is often used to conjure the image of insanity or sadness, especially in the case of the Stringy-Haired Ghost Girl or The Ophelia.

Usually this sort of change is done to signify a scene or setting change or show the passage of time in either a Flash Forward or a Flash Back. This can result in the Funny Flashback Haircut. Occasionally the trope can be used to play with the audience (see the Lost example below) or otherwise mess with our perception of what is going on. Do not confuse with a haircut that is done on-screen — as that falls under Important Haircut, Gag Haircut or Traumatic Haircut.

See Good Hair, Evil Hair for when this trope is used in conjunction with a Heel–Face Turn or Face–Heel Turn. Nonconformist Dyed Hair might come into play for someone experimenting with rebellion or leaving it behind.

Compare Time-Passage Beard, Important Hair Accessory, and Beard of Sorrow. Compare Expressive Hair for when the change happens only briefly, in reaction to a situation.

Contrast with Eyepatch After Timeskip, a more extreme change.