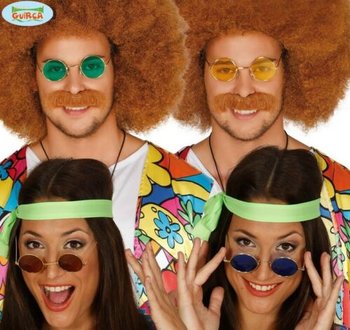 Far out!
Tea shades are a type of sunglasses with perfectly round lenses. They are usually associated with John Lennon (leading to the alternate name "Lennon specs") and are most commonly worn by beatniks, hippies, granola girls, and (since they are uncommon and noticeable) unconventional but notable characters. They are often tinted red or amber in media but clear lenses crop up as well. Black tea shades can have another meaning - since they look like perfectly round holes in the wearer's head where the eyes should be, they make for particularly striking Sinister Shades.
Advertisement: