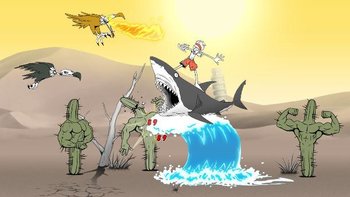 Just another ordinary day at Water Falls High School * ...Shark-surfing on a standing wave in the middle of a desert while fighting humanoid body-builder cacti and fire-breathing buzzards.
Advertisement:

Super Daryl Deluxe is a sidescrolling brawler/metroidvania/RPG starring Ordinary High-School Student Daryl Whitelaw. Daryl is a new student at the once-prestigious Water Falls High School - a school where there are no teachers and almost every period is "Study Hall". On his first day, a misguided attempt to make friends leads him to become an employee of Paul and Alan's Textbook Emporium. Co-proprietors Paul and Alan give him a self-help book - "Interacting With Others" - in lieu of actual pay. As it turns out, studying this book doesn't help Daryl socialize better, but instead teaches him absurd Supernatural Martial Arts.

After that, things escalate quite a bit. To give you a sense of how weird it gets, imagine you are a noodly mute hippie running through a WWI battlefield, shooting rubber ducks at goblins. This is so you can join Caesar, Ghengis Khan, Napoleon, and Cleopatra in an epic team up against a real-time-strategy game enthusiast leading an army of said goblins. This is actually a diversion from what you were *supposed* to be doing, which was getting back a classmate's cell phone from the vice-principal, who is a killer kung-fu robot. And no matter where you are or what you're doing, the background music is chanting your name.

Mind Screw. Mind Screw as far as the eye can see...