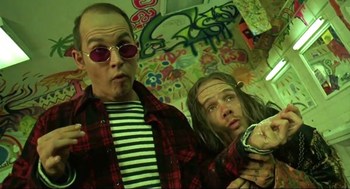 "...clearly I was a victim of the drug explosion - a natural street freak, just eating whatever came by."
"...as long as people are still having promiscuous sex with many anonymous partners without protection while at the same time experimenting with mind-expanding drugs in a consequence free environment, I'll be sound as a pound."
— Austin Powers, Austin Powers: International Man of Mystery
Advertisement:

This index lists tropes about, or related to, the Hippie Movement from The '60s and 70's.