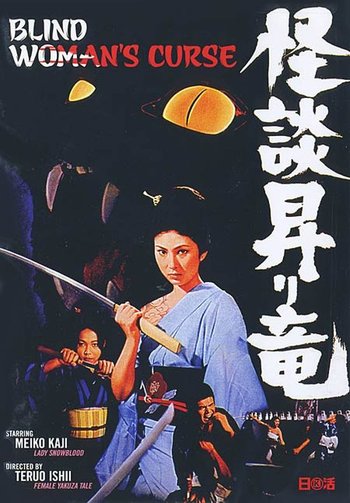 Blind Woman's Curse is a 1970 film from Japan directed by Teruo Ishii.

A young woman named Akemi has succeeded her father as the leader of the Tachibana gang of yakuza. In the opening scene her gang is engaging in a brutal fight with the rival Goda gang. As Akemi is pulling back her sword in order to deliver a killing blow to Goda, Goda's sister Aiko leaps in front of him in order to save them and Akemi's sword slices through her eyes. A cat then licks up the blood—yes, this happens—and then launches itself at Akemi.

Three years pass. Akemi, after serving time in prison, has reasserted control over her gang. She is now engaged in another war for territory, this time with the Dobashi gang. The war gets more complicated when a mysterious blind woman shows up, and starts killing the women in Akemi's gang one by one.