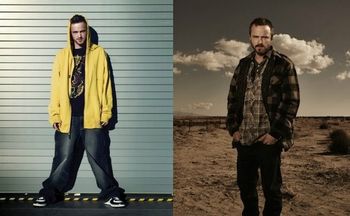 Jesse Pinkman in Season 1 (left) and Season 5 (right). Apparently, two years of Character Development and psychological trauma can leave a mark on a person's taste in clothing.
Advertisement:

In the visual media, it's common to give important characters some kind of a cool Iconic Outfit, Limited Wardrobe, or Consistent Clothing Style that lets the audience identify them immediately. Sometimes it's just there to look cool, or sometimes it can speak volumes about said character's personality.

If it's particularly well-entrenched, though, a gradual change in the character's wardrobe can be a convenient way of showing the audience how they're gradually evolving as a character. It doesn't have to be quite as overt as an Evil Costume Switch or a Good Costume Switch, and it may not even involve a character who wears a costume.

Maybe an extroverted teenage character gradually goes from wearing flamboyant, brightly-colored clothing to more conservative dress with muted colors as he starts to mature and calm down. Maybe The Hero gradually starts to wear darker clothing as he goes from optimistic to cynical, or starts to get more in touch with the harsh realities of life as a world-saving badass.

No matter what form it takes, it's a quick, easy way to show the audience that Nothing Is the Same Anymore, and it can add some visual variety to a show that might not otherwise have it.

A Sub-Trope of Costume Evolution.

Compare Iconic Outfit and Limited Wardrobe. This trope is one way that a Fanservice Pack may manifest.