Series / The Cry of Mann 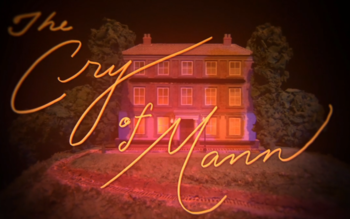 The Cry of Mann: A Trool Day Holiday Spectacular is a series by Wham City that streamed on the Adult Swim website in late October/early November 2017. It tells the story of a family whose patriarch, industrialist Tank Mann, has gone missing; meanwhile, due to the machinations of the stepmother, Courtney, the company is on the verge of a hostile takeover. Viewers could call in and talk to the characters thanks to the many orange phones that the "Ghost Lady" sets up around the house.

Episodes of the show were followed by Tanking Mann, a parody of aftershows like The Talking Dead.

In 2018, a new series, The Call of Warr was announced, continuing the Trool Day celebration. This time the focus shifts to a group of soldiers from the "M" Company lost in an abandoned town, along with some civilians. The callers and "Ghost Lady" now take on a more active role, and must decide to help the soldiers survive or aid the mysterious "Vid."

Advertisement:
open/close all folders
Tropes that apply to both series:
"The Cry of Mann":
"Call of Warr" and "Undercover Soldier":
"Tanking Mann":
Advertisement:
Feedback

When Prince murders a soldier, the screen emphasizes it by going red.

Example of:
Red Is Violent

Alternative Title(s): The Call Of Warr

When Prince murders a soldier, the screen emphasizes it by going red.