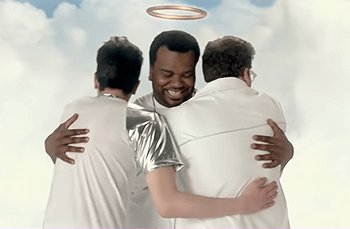 "For this last night I saw the heavens suddenly open, and choirs of angels descend to meet the soul of the holy Brenden; and so great and incomparable was the brightness, that in that same hour it illuminated the whole world."
— St. Columba, The Life of Columba by St. Adomnan
Advertisement:

One of the ways to turn a death scene bittersweet or a clear case of Died Happily Ever After is to show other souls and/or angels joyfully meeting the character on their deathbed (or in an Afterlife Antechamber, or during their ascension to Heaven). It can be a case of Together in Death, when the character is met by their (romantically or platonically) loved ones who died earlier, but not necessarily.

A darker version involves the character being welcomed, but not to Heaven. The extreme case may be a Welcome to Hell played literally.

If the angels and/or the departed souls greet the character but reveal the latter is Only Mostly Dead and has to go back, then the trope is It Is Not Your Time.

The trope's earliest mentions are Older Than Dirt, as Ancient Egyptian texts already speak of supernatural beings meeting the soul on its journey through the otherworld.

Compare Together in Death, Nostalgia Heaven (when the character sees not just their loved ones but the places they loved), Ghost Reunion Ending (when the ghosts appear to the living), Give My Regards in the Next World (when the living send greetings to the afterlife with the dying). Contrast Barred from the Afterlife, The Nothing After Death.

As this is a Death Trope, expect unmarked spoilers.