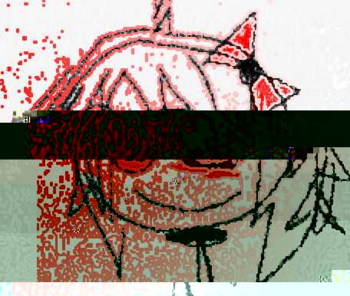 "Happy thoughts, happy thoughts, happy thoughts in shards, all over the floor."
"Have you ever noticed how much we use signal degradation as a shorthand for existential 'wrongness'? [...] I sometimes wonder what it says about our anxieties as a culture that the easiest way for media to freak us out is to confront us with manifestations of the artificiality of the medium."
— David J. Prokopetz

Some works intentionally create special effects that resemble real-life glitches. The image can be distorted or it can look like it was shorted out. There can be stripes, lines, little squares, rectangles and other geometrical shapes, grains or pixellated images, often combined with freaky colours. It might be accompanied by sound effects like static sound.

These effects are used to show that something weird, unnatural, or paranormal is going on. It can be used to imply that there is something wrong with the character's mind (for example, they're hallucinating or they are influenced by Subliminal Seduction). It's also frequently used to show A Glitch in the Matrix. When the person trapped in a Lotus-Eater Machine realizes that what they see is not real, the image is distorted and torn down.

This trope is rapidly becoming a staple subgenre of horror movies as the technology it's based on becomes more deeply entrenched in modern society. Also a standard feature of Found Footage Films.

Subtrope of Painting the Medium, and very close to Camera Abuse. Related to False Camera Effects. In video games, it may overlap with Interface Screw. Spooky Photographs have glitches as well, but they are present on the paper as opposed to a screen (unless they're digital). Compare Hologram Projection Imperfection. See also Ominous Television.

When encountered by the monsters of PATHOS-II, Simon's vision begins to stutter and pixelate as a result of the enemy's presence - as this run-in with the mysterious Johan Ross demonstrates.

When encountered by the monsters of PATHOS-II, Simon's vision begins to stutter and pixelate as a result of the enemy's presence - as this run-in with the mysterious Johan Ross demonstrates.