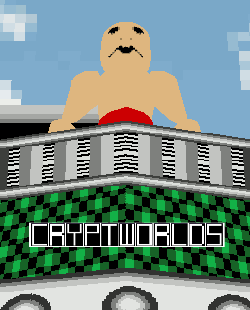 Right-click to piss on the world.
"'Crypt Worlds: Your Darkest Desires Come True' is the story of humanity. It will be told through a pure new medium: 'Video Game'. It was created in the year 2013 AD by a swarm of unruly Magical Girls. You will regret this decision."
— The ReadMe File
Advertisement:

Crypt Worlds is a freeware PC game by indie developer Lilith Zone about The Protagonist going on a quest to save the world. Despite how normal and average that sounds, it gets way weirder than that.

You wake up one morning with a goal: find the 5 Goddess Relics and bring them back to the Unicorn Goddess so that you can defeat Dendygar, who is otherwise going to destroy the world in 50 days. But the game has three endings, and you can choose to either help the Unicorn Goddess, or do something more sinister.

The Protagonist is never referred to by name and is only ever called "(YOU)". Almost everything else in the game is named in a similar way. [GOLD], [BREAD], [PISS], (GOD), the list goes on.

The graphics look very low-res and are about as grainy as a JPEG image, but they are placed on top of 3D characters, and 2D characters who look the same from every angle. Every time you talk to one of the characters, the chances of them saying something morbid or hateful are very high. Even the machine in the tunnels says that you have no emails, no friends, and that you have nothing.

Crypt Worlds can be downloaded for free here

A Kickstarter for the sequel, Crypt Underworld

, has been funded. The release date for Crypt Underworld appears to be a lot closer.