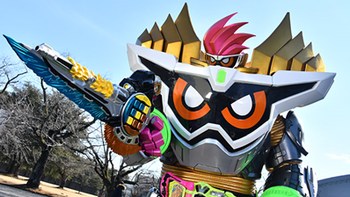 Kyotaro Hinata reports to Emu and Hiiro that if they cannot stop Kuroto within two days, they will lose their position in CR and their right to be Kamen Riders because they interfered with the Ministry of Health apprehending him and let a Gamer Driver be destroyed. Kuroto exits Genm Corp. and transforms into Genm Zombie Gamer Level X to fight the armored police force surrounding the building. Taiga and Hiiro explain to Emu about the new Gashat that didn't work when they're called to the scene; Hiiro stays to research the new Gashat further while Taiga takes the Gashat Gear Dual β. Emu and Taiga arrive at Genm Corp., Emu using the Driver that Kiriya had given to him upon his death; they transform into Ex-Aid Double Action Gamer Level XX and Snipe Simulation Gamer Level 50, fighting Genm and his zombie Bugster Viruses while Nico helps the wounded officers away.

Even the Viruses can now revive, but after discovering a file on Kiriya's laptop, Hiiro arrives as Brave Quest Gamer Level 2 and tosses the blank Gashat to Ex-Aid; attacking a further-angered Genm, he says Emu should be able to make it work like he did with a previous Gashat, Emu realizing that Mighty Brothers XX had come from a game he'd once thought up as a kid. He attempts to use the Gashat, but it knocks him out of his transformation; Brave insists that Kiriya had discovered Emu as the first Bugster virus patient and knew his infection was the source of all Bugsters and Gashats, Parado noting from afar that that's why he'd been killed. Emu repeatedly attempts opening and closing his Driver to no effect, Brave taking Hunter Quest Gamer Level 5 Full Dragon to hold Genm back but getting knocked down and out. Hiiro reminds Emu how Kiriya had entrusted humanity's fate to him, prompting Emu's Bugster virus to evolve, his body emitting a magenta flame before it accumulated into the Gashat, completing it into Maximum Mighty X and transforming him into Ex-Aid Maximum Gamer Level 99, the maximum Level. He Stage Selects to outside a hangar, Genm merging his zombie Viruses into a massive amalgamation Bugster Union; it attacks Ex-Aid to no effect and is easily knocked back and destroyed, rebuilding itself seconds later. Ex-Aid uses a Gun Mode Maximum Mighty Critical Finish to split the Union into the zombie Viruses again, Genm discovering that his Rider Gauge has also been repaired and filled, Ex-Aid explaining he used Kiriya's data and reprogrammed away Genm's immortality. Snipe takes the opportunity to hit the now-vulnerable Genm with Bang Bang Critical Fire, Ex-Aid pummeling Genm down to one health bar but stopping and untransforming. He's a doctor before a Kamen Rider and won't kill Kuroto, but Kuroto fires the Gashacon Bugvisor to cover his escape.

Taiga considers this a loss of opportunity, that killing Kuroto to save many more is worth it, but Hiiro and Emu disagree. Kuroto stumbles through the city, frustrated that the final two Bugsters from DoReMiFa Beat and Drago Knight Hunter Z haven't appeared yet; finding a crowd, he decides to speed up the process and sprays the two games' infections onto everyone. While searching for him, Emu is met by Parado, who attempts to convince Emu to kill Genm, as he's basically a dead shell already and has no life left to take; he has to beat the final boss for the happy ending. Taiga finds Kuroto impatiently waiting for the Bugsters to emerge, the two transforming into Snipe Level 50 and Genm Level X. Brave Level 5 Full Dragon arrives to suggest taking Genm's Gashat instead of killing him, but Genm knocks Brave away with an Arrow Mode DoReMiFa Critical Finish, tossing the Gashat aside to use an Arrow Mode Jet Critical Finish that Snipe counters with Bang Bang Critical Fire, knocking both Riders back. Emu arrives and transforms to Ex-Aid Level 99, Stage Selecting to a junkyard; Genm calls two Level X clones, but Ex-Aid knocks them aside and starts fighting the main Genm, Snipe and Brave facing the clones. Genm uses a Sickle Mode Giri Giri Critical Finish to no effect, the doctor Riders beating down their adversaries before using Drago Knight Critical Strike, Bang Bang Critical Fire, and Maximum Critical Break, destroying the clones and defeating Genm.

After the Game Area clears, Kuroto tries transforming again, but finds that the Dangerous Zombie Gashat won't trigger; Emu explains that his finisher had reprogrammed the Bugster antibodies from Kuroto's compatibility surgery to render him incompatible with Gashats. He believes that deep inside Kuroto is a good person who wants to make games, and wants to make him smile again; however, Parado arrives, knocking Kuroto down and taking his equipment. He says that game losers get bad endings before using the Bugvisor to infect Kuroto with Dangerous Zombie's infection, spraying a cloud to keep the others back. He thanks the "Game Master" and says he's taking over Kamen Rider Chronicle before leaving. In a mad fit, Kuroto begins digitizing, claiming himself a god before dissolving into data.

The Gashats Kuroto stole have been returned to their original owners, and despite Kyotaro's congratulations, Emu is sad he couldn't save Kuroto; Hiiro says dealing with death is key for a doctor. Sometime later, Emu weeps bitterly on the roof of the hospital.