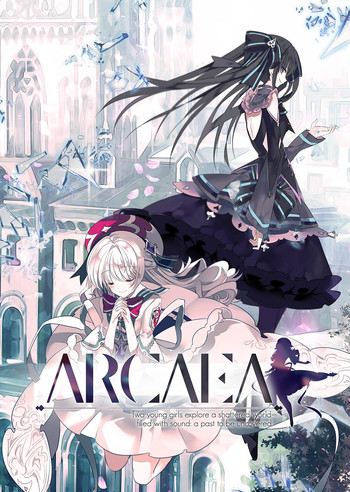 Two young girls explore a shattered world—filled with sound: a past to be uncoverednote Left: Hikari, Right: Tairitsu
"A harmony of light
awaits you in a lost world
of musical conflict..."
Advertisement:

Arcaea is a Rhythm Game for iOS and Android by lowiro, released on March 8, 2017 in all major regions.

The gameplay interface consists of four lanes of notes in a "hallway" perspective (similar to Guitar Hero, Sound Voltex, and CHUNITHM), and basic tap and hold notes may scroll down these lanes, and must be hit when they reach the judgement line. Unique to this game are Sky Notes and Arc Notes; both of these notes appear above the four lanes, with Sky Notes being "airborne" tap notes and Arc Notes being similar to hold notes, except that these notes in particular may twist horizontally and vertically. Harder charts often layer the "air" note types alongside the "floor" notes, requiring the player to use their sense of depth perception to hit the notes accurately.

The base game itself is free, including the initial "Arcaea" pack. Real-world money can be spent on Memories, which can then be used to purchase new tracks, song packs, and assist features in World mode. New tracks are added over time through app updates; while many of these are paid DLC, free-of-charge tracks are occasionally added to the "Arcaea" pack. The game also does periodic collaborations with other rhythm games, such as Dynamix, Lanota, Stellights, Tone Sphere, and Groove Coaster.

In addition to the core gameplay, the game features an extensive story told through text logs that are unlocked as the player fulfills conditions for each entry. The story follows a diverse cast of girls who wake in the strange, desolate world of Arcaea where the shards of glass that surround them hold memories, but with no memories of their own. As the girls wander this world, each bears witness to different memories laying in the world around them. Centrally, the main characters discover memories with opposite themes; those oozing with bliss are attracted to Hikari, while Tairitsu only bears witness to those of turmoil and ruin. Each of them sets out in this unknown world alone, attempting to find purpose in the surreal land.

The main story was concluded on July 13, 2022, with the "Silent Answer" epilogue as part of the version 4.0 update, therefore no more story contents involving Hikari and Tairitsu will be added. However, the developers have stated that they will continue to add songs (including collaboration content) and story updates for side characters.

for Nintendo Switch was released on May 18, 2021. The base game costs 39.99 USD, but comes with a large portion of the mobile version's songlist unlockable as part of it. Subsequent updates have added more recent songs through both free updates and paid Downloadable Content. Various existing elements, such as World Mode, were adjusted for the port. Finally, this version features exclusive Joy-Con controls that are compatible with the Switch's TV Mode in addition to traditional touch controls.