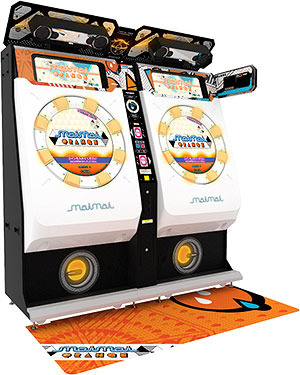 So I walked into the arcade one day and thought I stepped into an experimental laundromat by accident...
maimai is a new type dance game from sega corporation
Are u ready? Lights! Camera! Action!!
Advertisement:

maimai is a Rhythm Game developed by SEGA for arcades. It is one of SEGA's three Performai games, alongside CHUNITHM and O.N.G.E.K.I.

The game features a circular touchscreen, from the center of which notes appear and scroll towards the rim, along with a sub-screen at the top showing player statistics. On the rim are eight buttons, and as the notes reach the rim, the player must press their corresponding buttons. In addition to standard "tap" notes, the player may encounter "hold" notes that require pressing the button/screen down until the end of the note, as well as "slide" notes in which the player slides their hand(s) across the path indicated by the note.

The game is perhaps best known for its cabinet design, which resembles a front-loading washing machine. Some cabinets also have a camera that allows players to record their performances; however, not every song allows recording.

There have been nine main versions of maimai, each with an associated "plus" version with the exception of maimai FiNALE. All maimai games are exclusive to Japan, Australia and select parts of Eastern and Southeastern Asia. U.S. location tests were held for PiNK PLUS in 2016 and 2017, and maimai FiNALE cabinets without online functions were distributed to select Round 1 locations in the U.S. starting in late 2019.

In 2019, the original maimai line was retired in favor of maimai DX, updating the game's cabinet and hardware for the first time since the game's original release seven years prior. ALL.Net service for classic maimai was terminated in Japan in late 2019 and for overseas regions at the end of February 2020.

maimai features examples of the following:

The music video for "[=QZKago=] Requiem" abruptly fast forwards and cuts out. It then shows a fake "stage cleared" screen, which also glitches out.

The music video for "[=QZKago=] Requiem" abruptly fast forwards and cuts out. It then shows a fake "stage cleared" screen, which also glitches out.