Narm / The Legend of Zelda 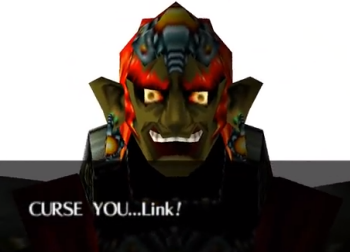 "Damn it, Ganondorf, this is a Zelda game, not Raving Rabbids!"
"Straight up, the only reason the Phillips CD-i Zelda titles are considered to have exceptionally bad dialogue is because they're fully voiced. There's dialogue in the mainline Zelda titles that'd be far more YTP-worthy than anything in Faces of Evil if it were to be spoken by an actual human being, and deep down I think we all know it.

People in the notes are acting like I must be talking about the broken English in the NES games as though literally everything that comes out of Sidon’s mouth doesn’t qualify."
—David J Prokopetz