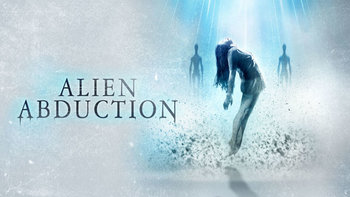 When you go camping, there are certain things you know to watch out for, like storms, wildfires, and hungry wildlife. The Morris family is about to add two more items to that list: strange lights in the sky, and aliens.

Alien Abduction (also known as The Morris Family Abduction) is a 2014 found footage film about a family camping trip that takes a horrifying turn when alien visitors show up looking for specimens to study, as seen through the eyes (and ubiquitous camcorder) of the 11-year-old Riley, who is autistic. It stars Katherine Sigismund, Corey Eid, Riley Polanski, and Jillian Clare.

Not to be confused with Alien Abduction: Incident in Lake County