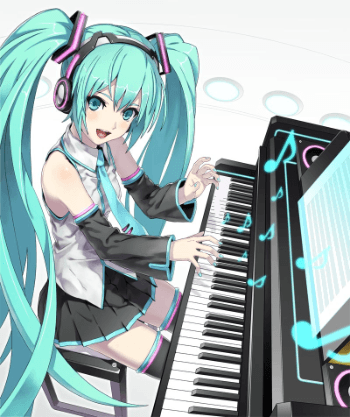 Anyone fluent in music knows that sheet is a complex writing system that takes months to learn to read.

In drawn fiction, when someone plays an instrument or sings or whistles, the music is "seen" as eighth notes (AKA quavers), regardless of what's being played or sung. Mostly a single eighth note with the stem up, but there can be the occasional pair of eighth notes sharing a flag.

It's so prevalent that many computer character sets include it, including Unicode.

Cartoonists untrained in music love this trope, mostly because an eighth note is immediately and unambiguously recognizable by laity as musical notation. Also, it's one of the most common markings in written melodies.

Video Games tends to also use them in order to represent singing in a work without voice-acting.