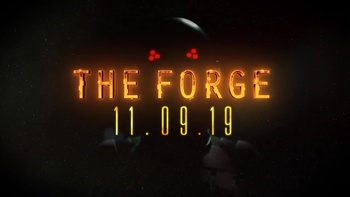 The Forge is the seventh Total Immersion Event on Toonami. The first episode premiered at the 2019 Momocon, and aired from November 9 to December 14.

TOM and SARA are discussing what to do with Georgia (the worm creature they took with them at the end of The Intruder III) as she's growing quite big and SARA feels the Vindication doesn't have the necessary environment of her home planet. Before the discussion can go further, the ship's navigation suddenly re-programs itself, locks out the crew and send them to an unknown space station. When TOM goes to confront those who brought them there, he's knocked out from behind by the ringleader and the Clydes are likewise taken out. This soon leaves SARA the only one who can save TOM from whatever the inhabitants have planned. All the while the duo try to figure out who exactly these people are.

, where they have also combined them into a 22-minute short film.

The Forge has the following tropes: