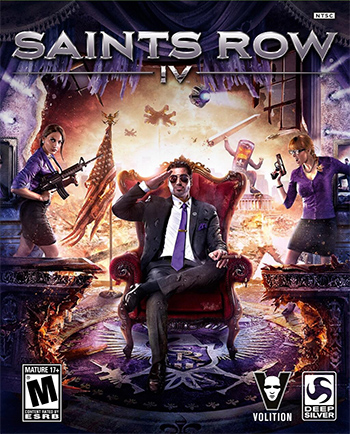 It's the American Dream, baby.
"It's one thing to be revered as a hero, it's another to be a hero. And that, my friends, is where our journey begins..."
— The opening cinematicspoiler narrated by Jane Austen.
Advertisement:

Saints Row IV is an August 2013 Wide Open Sandbox game developed by Volition. Due to THQ's bankruptcy, Deep Silver took up publishing duties for the game.

Five years after Saints Row: The Third, the Boss has been elected leader of the number one gang in the world: the United States of America. Unfortunately, this is followed by an Alien Invasion. Captured and trapped in a bizarre Lotus-Eater Machine world, the Saints must escape their virtual prison and save the human race, in the most insane ways possible.

The game's first trailer can be seen here

. The second one here.

The third one is here

. The fourth one here

. A demo was released in August 2013 in the form of The Inauguration Station, which is the character creation function for the game. Players may design their Boss and import their Saints Row: The Third characters via it, or just upload characters for when the full game came out.

Also, due to the vast amount of references from the trailers and character-builder demo alone, please find the Shout Out examples on the respective subpage.

Has a stand-alone Expansion Pack with Johnny and Kinzie fighting The Legions of Hell, titled Saints Row: Gat Out of Hell. The game was remastered for Xbox One and PlayStation 4, and is bundled with Gat Out of Hell in the form of Saints Row 4: Re-elected.