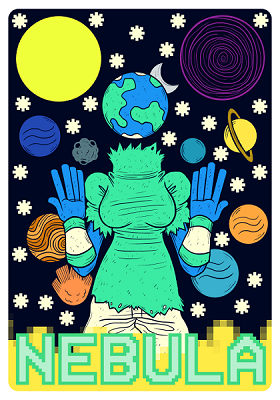 No one cares, Earth.
"Space is bad, to be honest with you."
— Intro to Nebula Ultra
Advertisement:

Nebula is a 2013-2017 Sci-fi/slice of life webcomic about the solar system, a very dysfunctional Cast of Personifications.

Basically, it's a drama comic (with no few moments of humor) about The Solar System/space objects in general, which are all sentient and humanoid (apart from the fact that they have representations of what they actually are for heads). It takes various characteristics of various celestial bodies and turns them into character traits and social situations - Earth is seen by her neighbors as overly interested in what everyone else is doing, Pluto is something of an outcast, Jupiter keeping a comet in orbit around him is regarded about the way as trying to keep a wild animal you found on the street would be, etc.

It has a rotating focus per comic, with pretty much all of the characters getting the limelight at some point— especially now that there's an on-going Story Arc about a mysterious being who has contacted Earth and Pluto, and who has plans of her own for the dwarf planets.

You can find Nebula Ultra, which contains comics 1-15 and the short story "Nix") for sale (pay what you want) at Gumroad here

. Nebula Spectra, which contains comics 16 and 17 as well as the short story "Proco", can be found here

Otherwise, the Ghostfruits tumblr has nearly all the comics and short stories online here.

Compare Milky Way and the Galaxy Girls, My Moon, Stellarscape, and Planetary Moe.

Tropes found in Nebula include: