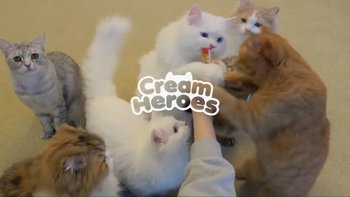 CreamHeroes is a South Korean YouTube channel that chronicles a woman known as Claire Luvcat, aka "Butler", and her 10 cats. The cats are:

You can view the old CreamHeroes here

(or If You're Happy, Say Meow

'' for her JP dub with ENG subs), her animation channel which depicts her time in Japan as an anthropomorphic ear of corn named Corn.

CreamHeroes and related videos contain examples of these tropes: