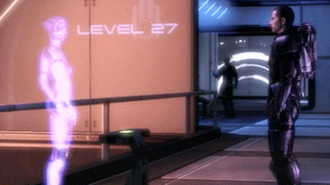 A Robot Buddy who happens to be made out of light.

Holography is the very real technique of using lasers to create a three dimensional image. It's very difficult and requires precisely calculated conditions and a bunch of costly hardware, but it's visually stunning, at least the first few times you see one. Technically, what is popularly called a "hologram" in science fiction is really called a volumetric display, as a true hologram is recorded onto a visual medium that provides the illusion of volume.

In The Future, presumably, this will get a lot easier. The Projected Man allows an artificial character to be a ridiculously human robot without all the logistical problems that implies.

The character may be constrained by power or the availability of a projector to add flavor.

Can be made of Hard Light, or can be an Intangible Man. Generally, if the Projected Man is solid, he will be able to become intangible in a crisis.

Frequently coupled with Tin Man or Mission Control. The inverse (human projection inside a computer world) is the Digital Avatar. Compare Astral Projection, where a living person makes their soul similar to this.

Cross with Spirit Advisor to produce Virtual Ghost. See also Hologram Projection Imperfection for when holograms don't work properly and have visual static or other glitches.

The name comes from the British science fiction movie, The Projected Man, that was riffed on MST3K. The eponymous character was more like a mutated freak with electricity powers than an example of this trope.