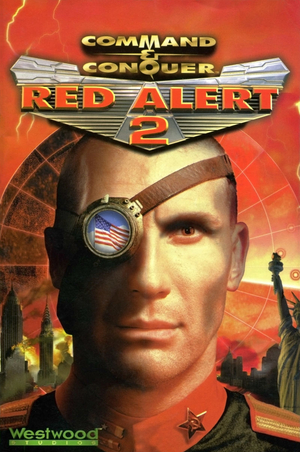 "We will bury them!"
— Soviet tanks.
Advertisement:

The fourth main game in the Command & Conquer series and the last fully developed by Westwood Studios. The second entry in the Command & Conquer: Red Alert Series and released in October 2000, Red Alert 2 is set during the 1970s, when the supposed puppet-Premier of the USSR leads a world communist alliance in a surprise invasion of the United States, with the help of the mindbending psychic Yuri.

The expansion, Command & Conquer: Yuri's Revenge, was released in October 2001. Turns out that Yuri had his own plans set in motion, and right as the Allies believe they've beaten the Soviets, Yuri reveals that he's still ready to fight — and ready to end the fight with Psychic Dominators, massive structures that can permanently mind-control the entire planet. When an airstrike to destroy the device in San Francisco only manages to temporarily knock out its power, a desperate gamble is undertaken using another of Einstein's inventions: a time machine.

This game and its expansion contain examples of:

The intro sequence in Command & Conquer: Red Alert 2 shows the Soviet Union launching a surprise invasion of the United States.

Example of:
Invaded States of America

The intro sequence in Command & Conquer: Red Alert 2 shows the Soviet Union launching a surprise invasion of the United States.