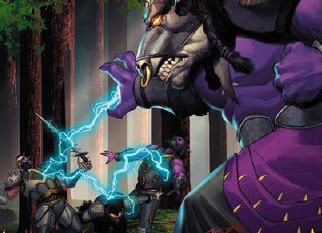 A Sub-Trope and combination of Shock and Awe and Herd-Hitting Attack, basically an electric attack hits a target, then it jumps towards other nearby targets (may hit allies, depending on the setting).

A Lightning Gun may have this ability. Not to be confused with the song by Steely Dan, or the other song by Rush. Is not necessarily the same as Lightning Lash but can overlap.