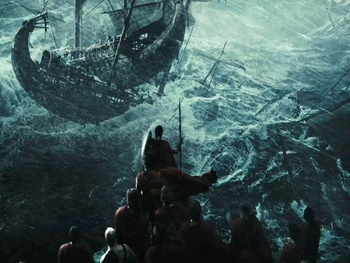 Weather frequently affects the outcome of battles. Rain, snow, sandstorms, etc. can make a big impact on strategy; it can be used to great effect by the better-prepared force — or everyone can get screwed over by it. "And then everybody on the temporarily victorious side suffered exposure" is a common form of Pyrrhic Victory. (It's also a quick summary of Russian military history.)

In video games, these conditions are likely to apply movement penalties and reduced visibility. For extreme weather, it may damage and even kill units. In other media, and perhaps even more commonly in real life, it shows up in more complicated and often painful ways.

Because it's such a common trope, there are a boatload of sub-tropes and related tropes. Winter Warfare is perhaps the most common manifestation of this. See also Fog of War, for visibility-reducing conditions; Weather-Control Machine, for devices and techniques used in manipulating the weather for this; Weather Manipulation, for people with superpower used in manipulating the weather for this; Battle in the Rain, for more than atmospherics; Geo Effects for other environmental impacts; and Weather Saves the Day, when a sudden change in the weather saves the heroes.