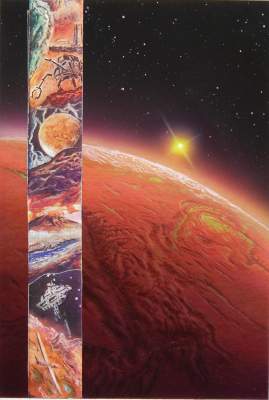 A new home for mankind...
The day John Boone was assassinated we were up on east Elysium and it was morning and this meteor shower came raining down on us, there must have been thirty streaks or so and they were all black, I don't know what those meteorites were made of but they burned black instead of white...
Advertisement:

The Red Mars trilogy is a series of novels by sci-fi author Kim Stanley Robinson. It explores the settlement and subsequent terraforming of Mars over the course of nearly two centuries. The series is known for its accurate science, complex characters, realistic portrayals of politics and economics, and for its ultimately optimistic tone, shading towards a utopia rather than a dystopia.

Red Mars depicts the settlement of the first Martian colonies. The initial group of colonists, known as the "First Hundred", are tasked with settling and ultimately terraforming the planet. However, they're almost immediately divided over the degree to which they should terraform, as well as how independent the new Martian society should be from Earth. This crystallizes into two major movements: the Reds, who want to limit terraforming and keep Mars as close to its natural state as possible, and the Greens, who want to fully terraform Mars into an Earth-like environment.

Green Mars depicts the fallout of a failed revolt, which has resulted in an underground separatist movement whose struggle for political freedom from Earth forms the bulk of the plot. Against this political backdrop, Martian society is strained by a massive influx of immigrants and increasing corporate meddling from Earth, and the terraforming process begins to proceed at a runaway pace as Mars begins to literally turn green.

Blue Mars shows the aftermath of Mars becoming fully independent. After a global disaster on Earth threatens to destabilize the already overpopulated and polluted planet, the new Martian government is thrust into the unexpected role as Earth's savior. Meanwhile, the colonization of the rest of the solar system is explored as well as the continuing effects of the Longevity Treatment on both the main characters and society as a whole.

A companion collection of short stories, The Martians, features tales set in the same universe and more fully explore ideas only hinted at in the novels, as well as featuring fanciful what-if stories.

Later works by KSR often feature recurring elements from the Mars Trilogy, but none are direct sequels. The novel 2312 picks up on many of the settings and tropes that were only briefly alluded to in the Mars Trilogy, with its two central characters natives of Mercury and Titan. According to Word of God, the basics of Martian history are similar, but the Mars of 2312 is far less terraformed than the Mars of the trilogy, and the economics of the solar system are rather different, too. Aurora is similar again, but lacks the longevity technologies and terraformed Mars of the Mars Trilogy.

Finally, the novel Galileo's Dream may also be related to the series, in the sense that it ties much of Robinson's work together, though its rather more fantastic elements conflict somewhat with the hard sci-fi themes of the trilogy.