Literature / Out of the Silent Planet 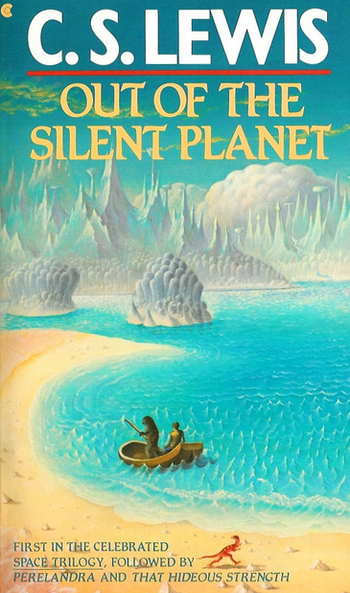 The first volume of The Space Trilogy by C. S. Lewis, Out of the Silent Planet is a tribute to early science-fiction of the likes of From The Earth to the Moon.
Advertisement:

Philologist Elwin Ransom is kidnapped by the (evil) scientists Devine and Weston, and taken in their space-ship to the planet Malacandra (or Mars, as we call it) as a human sacrifice to appease the natives while they mine the place for gold. He escapes, locates and falls in among the civilized natives (the otterlike hrossa) and learns their language and their ways.

He is then summoned to see Oyarsa, the ruler of Malacandra. This being is an eldil — basically, an angel — and actually just wants to talk. In the court of Oyarsa, Ransom learns much of the history of eldila and the solar system, and the reason why Thulcandra (the titular Silent Planet, that is, Earth) has heretofore been cut off from the Heavens. Weston and Devine reappear, and their ultimate villainous goals are laid bare and dissected. Oyarsa then sends the three humans back to Earth.