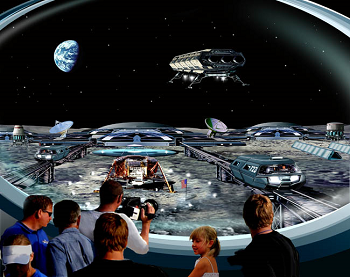 Sometime in The Future, the technology of space travel improved enough to allow moving personnel and materials off Earth on a large scale. At this point, humankind started Settling the Frontier in its own astronomical neighborhood. The most likely places for colonies to be established are on The Moon (which may be called Luna, for the same reason that Earth is often known as Planet Terra), Mars or both, though other planets, moons, dwarf planets and even asteroids within The Solar System are fair game for this trope.

In the not-so-far future, these colonies may consist of little more than mining operations or military outposts; in farther futures, these colonies may become part of galaxy-spanning empires centered on Earth. Making the environment more Earthlike, to the point where you don't need a spacesuit or pressurized dome to breathe, tends to require some amount of Terraforming, unless Zeerust-flavored Artistic License can be invoked. In the latter case, the colonization effort may run up against indigenous aliens.

Off-Earth colonies may serve as a refuge from populations dislocated from Earth That Used to Be Better. They will also likely be the first targets of an Alien Invasion. If the colonies have enough resources and political willpower to potentially become independent of Earth, The War of Earthly Aggression may result.