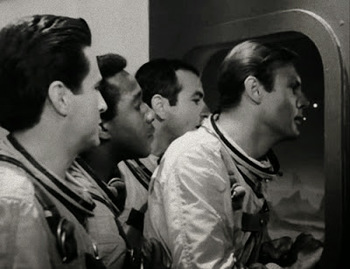 The crew of the M2 scans the surface of Mars... 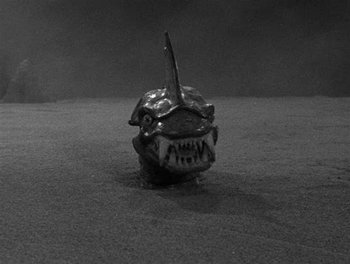 ...unaware of the terror hidden beneath the sands.
The Control Voice: In the vast immensities of cosmic space, bold adventurers streak their way to join battle with strange enemies on strange worlds — the alien, the unknown, perhaps even the invisible, armed only with Man's earthbound knowledge...

Astronauts on Mars are terrorized by an unseen enemy.

The Control Voice: Battle joined. Casualties? Yes. Resolution: Victory, of a sort. A painful step from the crib of destiny. On another day, a friend, perhaps, instead of a deadly peril — part of the saga of the space pioneers.

"Troper, get back to your vehicle!"