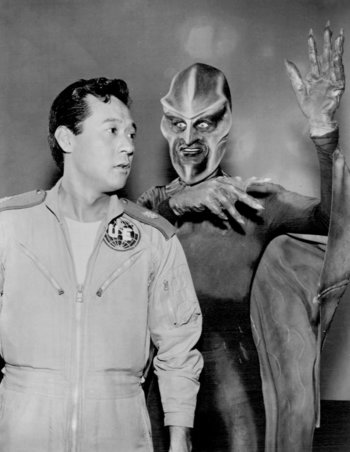 The Ebonite Interrogator (John Anderson) menaces Major Jong (James Shigeta) in a publicity still.
The Control Voice: A war between worlds has long been dreaded. Throughout recent history, Man, convinced that life on other planets would be as anxious and belligerent as life on his own, has gravely predicted that some dreadful form of combat would inevitably take place between our world and that of someone else. And Man was right. To the eternal credit of the peoples of this planet Earth, history shall be able to proclaim loudly and justly that in this war between Unified Earth and the planet Ebon, Ebon struck first. Ebon: Its form of life unknown, its way of life unpredictable. To the fighting troops of Earth, a black question mark at the end of a dark, foreboding journey.

In response to an unprovoked nuclear attack from the planet Ebon, a group of soldiers representing Unified Earth is sent to fight the enemy on their alien world. Captured en route to Ebon, the soldiers undergo physical and psychological torture and interrogation at the hands of the Ebonites, demonic, bat-winged aliens who possess the ability to control the five senses. The prisoners become suspicious of each other when their captors claim they have received cooperation in obtaining military secrets, which is further complicated by each one's past and ethnic origins, along with the unexpected appearance of high-ranking Earth officers among the hostile aliens. The earthmen are subjected to various interactive images of relatives and friends, which have been implanted in their minds during questioning, allowing them to feel a false sense of security, or to instill deeply hidden emotional conflicts. In the end, it is revealed that all of this is but a military "game", organized by the Earth officers to test their troops' loyalty and valor under intense interrogation and psychological stress. The Earth-Ebon war itself is a fake, as the Ebonites' initial bombardment was unintentional. Unexpected accidents and deaths having occurred during the test, the Ebonites - who are, actually, a peaceful and honorable alien civilization - eventually ask for such an immoral and inhuman experimentation to end at once; but, nonetheless, fail to prevent one last man from being killed...one of the conspiring Earth officers thought to be an illusion created by the Ebonites to trick the captives into revealing more information.

The Control Voice: The exploration of human behavior under simulated conditions of stress is a commonplace component of the machinery called war. So long as Man anticipates and prepares for combat, be it with neighboring nations or with our neighbors in space, these unreal games must be played, and there are only real men to play them. According to established military procedure, the results of the Ebon maneuvers will be recorded in books and fed into computers for the edification and enlightenment of all the strategists of the future. Perhaps they will learn something.