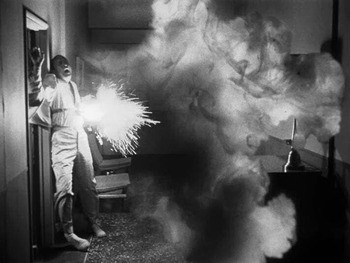 The energy monster claims another victim.
The Control Voice: His name is Warren Edgar Morley. For the past six months, he has guarded this gate from eight in the morning until six at night, at which time he is replaced by another just like himself. These are the last few moments of his life.
Advertisement:

An energy monster is held captive in a laboratory by a scientist who wishes to study it at any cost.

The Control Voice: The Conservation of Energy Law — a principle which states that energy can be changed in form but that it cannot be either created or destroyed. And this is true of all energy — the energy of genius, of madness, of the heart, of the atom. And so it must be lived with. It must be controlled, channeled for good, held isolated from evil… and somehow lived with, peaceably.
Advertisement:

It Troped Out of the Woodwork: