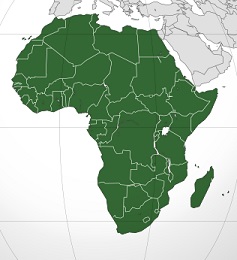 It's gonna take a lot to drag me away from you
There's nothing that a hundred men or more could ever do
I bless the rains down in Africa
Gonna take some time to do the things we never had
— Toto's "Africa", a song about a white man trying to write about Africa but struggling because he's never been there.
Advertisement:

The second largest continent in the world after Asia in both geographic size and population, Africa covers one-fifth of the Earth's land surface and contains 54 countriesnote 56 if you include the separatist states of the Sahrawi Arab Democratic Republic/Western Sahara and Somaliland, from Morocco and Somalia respectively. While 46 nations recognize the Western Sahara, the arguably more legitimate Somaliland has absolutely no recognition from anybody at all, 8 dependencies, two thousand languages and upwards of a billion people. Its primary cultural divide is between the largely Arabic-speaking Muslim states north of the Sahara plus the country of Sudan (known collectively as North Africa), which have more in common with the rest of the Arab world than the rest of the continent, and "Black Africa" or sub-Saharan Africa further south. There are a lot of other divisions, though, including the differences between Southern Africa and the rest of sub-Saharan Africanote Southern Africa is more Westernized than the rest of the continent, has more British, Dutch and German influences than the rest of Africa (which is more French and Portuguese influenced), is more temperate than the rest of sub-Saharan Africa, has the largest number of Asians, coloureds (people of mixed Asian, African and European descent, mostly native to western South Africa) and whites in Africa, and is more developed and stable than the rest of sub-Saharan Africa along with having the world's largest platinum supply, though it still has its own problems, especially HIV/AIDS, income inequality and poverty and the transition zones just south of the Sahara: the Sahel

(which confusingly does not include the country of Sudan, where the people are for the most part culturally Arab but look "African" to outsiders).note This makes sense if you know Arabic; "Sudan" in Arabic means "Land of the Blacks", but historically this was purely a comment on skin color rather than identifying some "race" of people distinguished from Arabs. As there have always been dark-skinned Arabs—particularly in Yemen (which is strongly linked to the Horn of Africa)—the "Blacks" in question could also be Arab. Africa is sometimes also merged with Europe and Asia as Afro-Eurasia.

Africa is much bigger than most people realize, largely because of the distortions formed by creating a flat map of the round Earth, which also has the unfortunate side effect of making Greenland look a lot bigger than it actually is (in reality, Greenland is over 250 km2 (96.53 sq mi) smaller than Africa's second-largest country, the Democratic Republic of the Congo). To get an idea of Africa's scale, it is comparable to the continents of Antarctica, Europe and Oceania combined. Of course, this could also be attributed to the fact that Africa quite possibly constitutes the world's biggest Hufflepuff House despite housing a billion plus people. Out of about 55 countries, only Egypt, Nigeria, Libya, Somalia, Madagascar, and South Africa are really known by the general Western public (and Madagascar has DreamWorks to thank for much of its recognition)…

The continent is often stereotyped as the land of poor, illiterate, sick blacks who live in hut villages and often wage war against repressive governments led by loony presidents who have egos the length of seventh heaven and/or the land of starving children living among untamed wilderness, who warrant sympathy from rich whites to conque- er, "educate" them, yet are always hindered by Western-hating terrorists who would smuggle people in and out for blood diamonds or declare religious utopia somewhere. Sadly, those kinds of stereotypes are exactly why most of Africa becomes so unknown to the West and why so little media can accurately depict its culture and peculiarities, or how, what and why the problems are affecting the continent the way it is, and whether it is because of excessive racism and xenophobia or just plain ignorance and lack of education about the continent can be left up to interpretation.

If you are curious about African-Americans, they are the American-born descendants of Africans brought over to the United States as slaves in the Atlantic slave trade, particularly West Africans, with most African-Americans being of Nigerian descent. They are not to be confused with Africans from the continent itself, though African-Americans did establish a country in West Africa, Liberia (which is notably one of the only two countries in the continent that weren't colonized by Europeans during the 19th century, the other being Ethiopianote though Fascist Italy briefly took over Ethiopia in the 20th century), with that country having it's own unique ethnic group, Americo-Liberians, as a result, and they also founded Freetown, the capital of Sierra Leone. Most Caribs are also descended from West Africans brought to the islands by Europeans in the same slave trade, with The Caribbean having many aspects of West African culture in general as a result.

For Africa in fiction, see Afrofuturism, Ancient Africa, Bulungi and Darkest Africa. See also Amoral Afrikaner, Great White Hunter and Mighty Whitey. And despite what you may have heard, Africa is not a country.note (though the term was originally meant for just one province of The Roman Empire in the area between present-day Tunis and Tripoli, which was taken from an earlier Punic term that probably designated Carthage. The term was later expanded to include all of the continent, but the Siculo-Normans used it anyway to designate the same region conquered during the 12th century, which was styled as "The Kingdom of Africa") 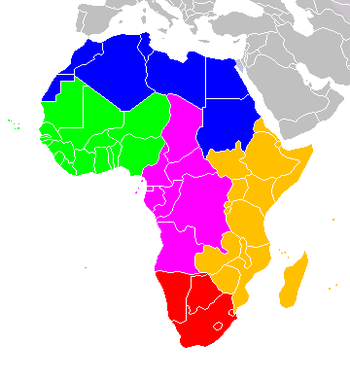 Defunct countries, empires, and other entities

Useful Notes and other articles related to Africans and African Culture

See Egypt, Libya and Morocco for everything solely related to those countries

See Nigeria for everything solely related to Nigeria

See Kenya, Madagascar and Somalia for everything solely related to those countries