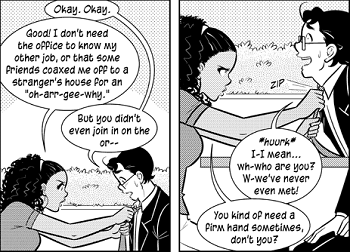 She's quite nice really, but keeping secrets is hard work.
"My swashbuckling fop cannot take the flaw Dark Secret: Not Gay."
— #90 of Things Mr. Welch Is No Longer Allowed to Do in an RPG
Advertisement:

Some characters have some dark, terrible secret in their pasts that they don't want anyone to know. Sometimes they killed someone close to them. Sometimes they're secretly a double agent. Sometimes they took the last cookie from the cookie jar. It doesn't matter how big or small the secret is, it just matters that the person keeping it thinks that it's vitally important that it stay hidden.

There are two standard reactions to these coming out. Either everyone involved is shocked and horrified and lives are ruined. Or it's almost an anticlimax either because they've known all along, or it just wasn't as dark a secret as the keeper thought it was.

When it's a whole town that's doing this it's a Town with a Dark Secret. When you get even bigger in scale you get an Empire with a Dark Secret. When it's society-wide in general, you get Masquerade. My Greatest Failure is a particularly common type of Dark Secret, and it is often an element of a Dark and Troubled Past or a Mysterious Past and revealed in a Troubled Backstory Flashback. Related to They're Called "Personal Issues" for a Reason. See Open Secret for when your secret is not so secret. When they cause you to be suspected of unrelated crimes, they become the Big Secret.

Supertrope to Coming-Out Story, a whole plot trope where the Dark Secret is being LGBT+. May overlap with Beneath the Mask if they care about hiding their true personality from everyone else. Hide Your Otherness may overlap with this if the reasons for it are personal. If the secret is something you can lock up, it will lead to a "What's Inside?" Plot.

This being a trope about secrets there will be Spoilers ahead.

Frond reveals when he run for class secretary as a kid he stole some ballots for his opponent and hid it in a vase. He was going to confess but the ceramics room was sealed up.

Frond reveals when he run for class secretary as a kid he stole some ballots for his opponent and hid it in a vase. He was going to confess but the ceramics room was sealed up.