Comic Book / Death of the Family 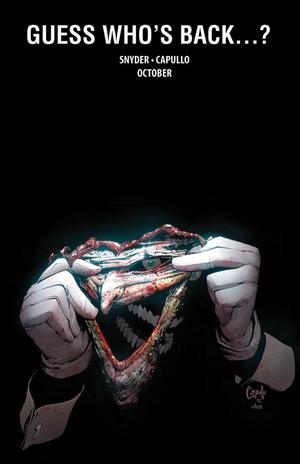 Starting in October 2012, Death of the Family is the second Batman crossover spinning out of Scott Snyder and Greg Capullo's relaunched Batman title, featuring the Joker's return to Gotham City. Like Night of the Owls before it, Death of the Family isn't a traditional crossover in the sense of the reader needing to read each title in a specific order. The main story is told in the pages of Batman, while the other titles tell their own stories within the larger arc. Titles that tie into the story include Nightwing, Batgirl, Batman and Robin, Detective Comics, Red Hood and the Outlaws, Catwoman, Teen Titans and Suicide Squad. While the story begins in the 13th issue of Batman, the tie-in books begin their stories in issue #14 or #15.

The first issue of each title's Death of the Family story features a special die-cut cover illustrated by Batman artist Greg Capullo, in which a mask of the Joker's skin/face folds over an image of the starring character in each book.

Not to be confused with A Death in the Family.