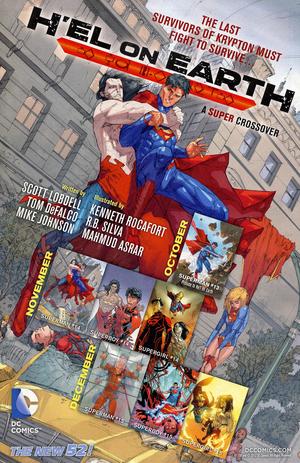 H'el on Earth is the first Superman family crossover story arc of the New 52. Starting in October 2012, the story begins in Superman #13 and continues through the Superboy, Supergirl, and Superman titlesnote Superman #13 is a prelude. The story proper begins in Superboy #14, continues through Supergirl #14 and Superman #14 before rounding back to Superboy #15 and going through the process again. until its conclusion in Superman #17. It is written by Scott Lobdell, Tom DeFalco, and Mike Johnson.
Advertisement:

The story introduces H'el: the third surviving Kryptonian to appear in the New 52 (after Superman and Supergirl). H'el is a mysterious Kryptonian who wishes to resurrect Krypton regardless of the expense to Earth. Superman tries to stop him, but H'el turns out to be more powerful than Superman, Supergirl, and Superboy. How will they combat a threat this magnitude?

H'el on Earth later gained a sequel story in the form of Krypton Returns.

H'el on Earth contains examples of: