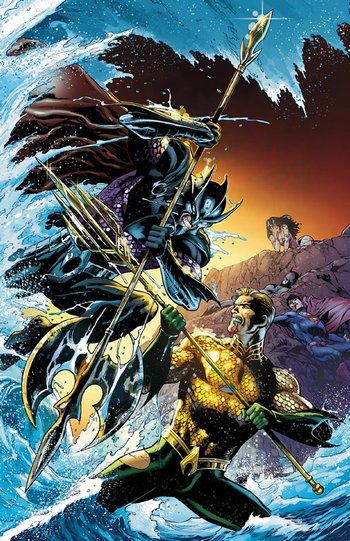 Two brothers, one throne.
Throne of Atlantis is a New 52 Bat Family Crossover between Justice League (2011) and Aquaman. It is written by Geoff Johns.
Advertisement:

When a US Navy missile drill goes wrong for unknown reasons, it sends multiple missiles into the ocean and strikes Atlantis. Their king, Ocean Master, takes it as a declaration of war and initiates ocean-to-surface war tactics that both he and his brother, Aquaman wrote up years ago. Atlantis sends giant tsunamis through many coastal cities including Gotham City, Metropolis and Boston; planning to invade and eventually sink the city hit the hardest. When Ocean Master surfaces in Boston, it is up to Aquaman and the Justice League to end his attack on the surface world.

Throne of Atlantis provides examples of: