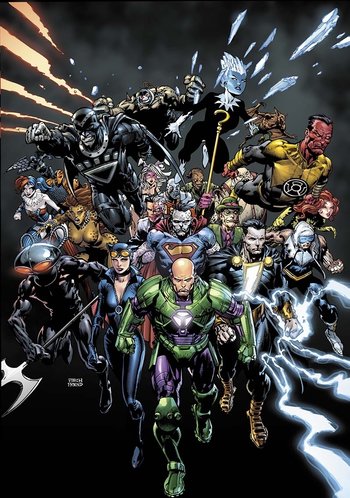 "Hope won't save the world. But maybe together... we can."
"Superman is gone. This is a job for Lex Luthor."
Advertisement:

Forever Evil is a seven issue miniseries from the New 52 of The DCU starring DC Comics' most famous villains. The miniseries is written by Geoff Johns and illustrated by David Finch.

An 18-part Cross Through, Forever Evil: Blight, focuses on John Constantine gathering allies in locating Zatanna, Madame Xanadu & the rest of the Justice League Dark who have disappeared since the arrival of the Crime Syndicate. However, they soon realize that the Syndicate's arrival has done much more damage to the balance of magical nature and leads to the threat of Blight, the concentrated evil in the human subconscious, who takes a human form and invades the material world. The story is told in Justice League Dark, Constantine, Trinity of Sin: Pandora, and Trinity Of Sin: The Phantom Stranger.

Not to be confused with the 1980s film of the same name.

Forever Evil and its tie-ins contain examples of the following tropes:

open/close all folders
A - F
"From a young age, we’re taught the difference between good and evil, and for most of us, those early lessons go on to shape our entire worldview. So imagine what might happen if we were to flip the message. If we were to teach our children that evil was the way of the world. If teachers and philosophers taught their students to “do no good” rather than to “do no harm.” If the world leaders and heroes of our planet sought to maintain chaos and corruption rather than peace."
G - L
M - R
S - Z