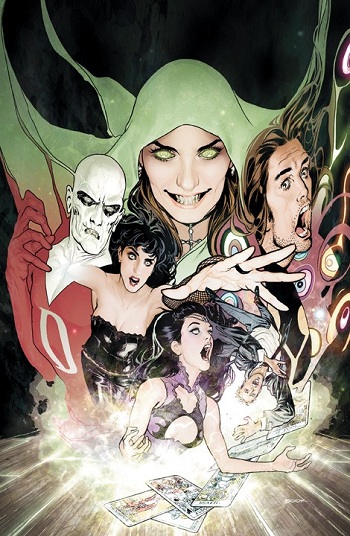 Not the shiny-happy Justice League
Advertisement:

Justice League Dark is a comic featuring a group within the Justice League that focuses on the magical and supernatural aspects of the DCU.

The original run launched as an ongoing series in the New 52, with the initial cast featuring Zatanna, Deadman, Madame Xanadu, John Constantinenote A younger, different Constantine from the one seen in Hellblazer, Shade, the Changing Man and a new character called Mindwarp, who was introduced in Flashpoint. The team's roster fluctuated regularly over the course of the series, drawing on DCU characters with a connection to the supernatural.

It came to an end in 2015 after 44 issues and two annuals... but as the team's members would be the first to tell you, some things don't stay dead for good.

In 2018, a new series was announced as part of the "New Justice" DCU imprint spinning out of Justice League: No Justice, with Wonder Woman heading a team including Zatanna, Swamp Thing, Detective Chimp, and Man-Bat, their first storyline involving the group dealing with the aftermath of the Dark Multiverse Invasion and them trying to stave off the Death of Magic. The very, very, very bloody Death of Magic.

As part of the DC Infinite Frontier relaunch, the 2018 series was cancelled and Justice League Dark was made a backup feature in the main Justice League book.

In addition to the animated film, there have been numerous attempts at adapting Justice League Dark to live-action, most notably by Guillermo del Toro. His version, titled Dark Universe, was confirmed to exist as a screenplay in late 2014, and reportedly featured a lineup consisting of Constantine, Swamp Thing, Etrigan the Demon, Deadman, Spectre, and Zatanna. Del Toro's film wouldn't have connected to the DC Extended Universe (nor the 2014 NBC series Constantine) though he expressed interest in modifying his script to accommodate them and even having Constantine's Matt Ryan reprise his title role. By June 2015, it was reported that del Toro had left the project, which would still be developed without him as director. In August 2016, Doug Liman was then attached to direct, with del Toro producing, but in May 2017 it was reported that he stepped down to focus on his adaptation of the novel The Knife of Never Letting Go. In January 2020, it was reported that J. J. Abrams was developing Justice League Dark projects as part of his new production deal with WarnerMedia, which would possibly involve films and television series focusing on various characters. In April 2020, it was announced that a series would be broadcast on HBO Max at some point in the future