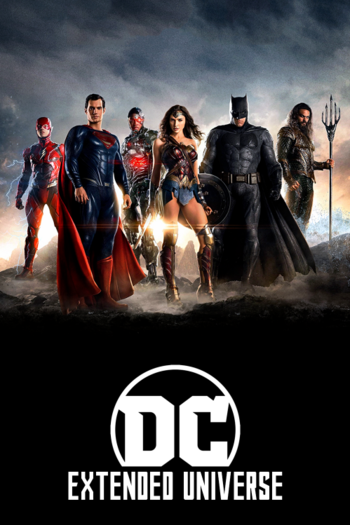 "The Red Capes are coming! The Red Capes are coming!"
Bruce Wayne: We have to stand together.
Diana Prince: A hundred years ago, I walked away from mankind, from a century of horrors. Man made a world where standing together is impossible.
Bruce: Men are still good. We fight, we kill, we betray one another. But we can rebuild. We can do better. We will. We have to.
— Batman v Superman: Dawn of Justice
Advertisement:

The DC Extended Universe, or DCEU note The name "DC Extended Universe™" was initially a made-up name that came from an article written by Keith Staskiewicz for Entertainment Weekly in July 2015, but caught on among most fans and entertainment journalism because no one said it wasn't an official name until 2017. Various actors and crew members also referred to it as "DCEU" anyway, and the name was canonized with the launch of HBO Max., is a film franchise produced and distributed by Warner Bros., the company that owns the rights to all DC Comics franchises. Starting in 2013 with Man of Steel, it is, for all intents and purposes, DC Comics' and Warner Bros' equivalent to Marvel Comics' and Disney's own cinematic universe. The setting consists of films adapted from various DC characters and storylines in a Shared Universe (though not always with emphasis on this trope).

Early plans for a shared DC movie universe were evident in the 2011 Green Lantern movie, but a fresh start with Man of Steel proved to be a stronger base to branch from critically and financially. Christopher Nolan and Zack Snyder were responsible for most of the early development before heavy production shuffles changed the face of the franchise which is now produced by its own movie division instead of Warner Bros' main movie branch. For more on the subject, see the DC Films page.

Following the events of Crisis on Infinite Earths, the DCEU is confirmed to exist in DC's live-action Multiverse. Said multiverse will be part of The Flash which will adapt the plot of Flashpoint but focus on interdimensional travel instead of time travel.

You can vote for your favorite film here

#-L
M-Z
"Everything breaks, Victor. Everything changes. The world is hurt, broken, unexchageable. The world's not fixed in the past, only the future. The not yet. The now. The now is you. Now, now is your time, Victor. To rise. Do this, be this, the man I never was, the hero that you are. Take your place among the brave ones. The ones that were, that are, that have yet to be. It's time you stand, fight... discover... heal, love, win. The time is now."
— Silas Stone