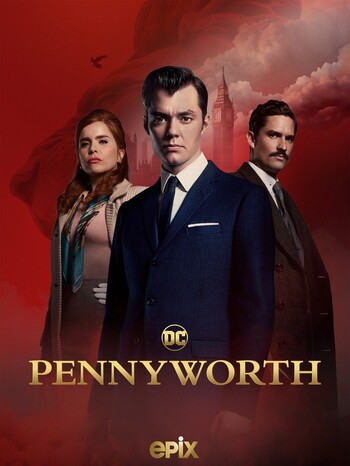 Pennyworth is a television series created in 2019 by Bruno Heller and Danny Cannon after the conclusion of their previous show, Gotham. It is about the DC Comics character Alfred Pennyworth, the loyal butler of Bruce Wayne / Batman's family.

An origin story taking place in an alternate 1960s England, the series is centered on its titular character (portrayed by Jack Bannon) as a young man following his time as a soldier in the Special Air Service, as he forms a security company and is hired by Thomas Wayne (Ben Aldridge) and Martha Kane (Emma Paetz) and the revolutionary group they belong to, the No Name League, to fight against another group, the ruthless, power-hungry and fascistic Raven Society, led by Lord James Harwood (Jason Flemyng), who's assisted by his enforcer Bet Sykes (Paloma Faith). Allegiances tend to switch and collide with personal feelings, lust and greed as England descends into civil war and chaos.

Season 1 started airing on Epix on July 28, 2019. The first four Season 2 episodes started airing on December 13, 2020, with the airing of the rest resuming on March 7, 2021. The series migrated to HBO Max for the third season with the added subtitle The Origin of Batman's Butler, though it is expected that Epix will retain linear television rights to the series and air new seasons second-run. Bruno Heller went on to say the writers have stories in store that could potentially push the series up to five seasons.

Example of:
Hilarious in Hindsight