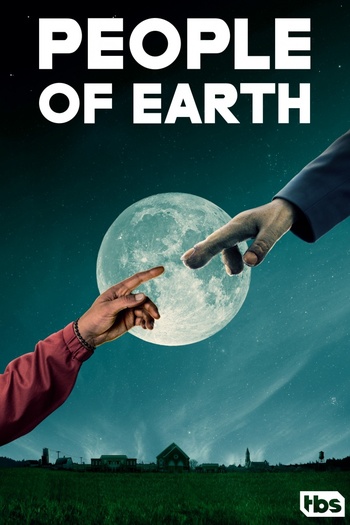 "Don't get weird, okay?"
— Kurt (as the voice of a hallucinated deer)
Advertisement:

People of Earth is a TBS original sci-fi comedy series which premiered on October 31, 2016.

Ozzie Graham (Wyatt Cenac), once an award-winning serious journalist, now reduced to writing clickbait for a major news aggregator, is assigned to write a story on StarCrossed, a support group for people who believe they’ve been abducted by aliens, who meet in a Catholic church in upstate New York. Skeptical at first, Ozzie soon begins to wonder if the abductees' — sorry, make that experiencers' — stories might not hold a grain of truth...

...which they definitely do, since the other half of the show is a Work Com about the mundane office routine of said alien abductors as part of the ongoing Reptilian conspiracy to take over the world.

The series was renewed for a second season, which began airing on July 27, 2017. The series was initially renewed by TBS for a third season, but later the decision was reversed and the series cancelled after the scripts were already written, resulting in the show ending on the second season's Cliffhanger.

People of Earth contains examples of: