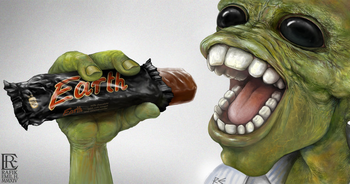 ). Used with permission.
Crichton: Well, somebody got a sugar high. You been stealin' candy,

Mr. Burroughs?
Rygel: Crichton, how illegal is this dren? You gotta get me more, I don't care what it costs!
— Farscape, "Kansas"
Advertisement:

Earth is not the center of the universe, but nonetheless it is special - we have a precious commodity. No, not our nubile Earth women, no matter how easy they may be. Something better.

Turns out, our common comestible X is an Impossibly Delicious Food to aliens, who go to absurd lengths to acquire it. UFOs are smuggling candy past border checks. Alien abductions happen because humans might have Hershey bars in their pockets. Cattle mutilations? Aliens will NOT give up until they figure out how to extract chocolate milk.

Chocolate is a common target, but almost any Earth snack food can be used here. Chocolate (or other snack foods) might be a Power-Up Food to the aliens, but if they need it to power their spaceships, it's What Do You Mean, It's Phlebotinum?.

Not to be redundant, this has nothing to do with the nougat bar and the confectionery company making said nougat bar.