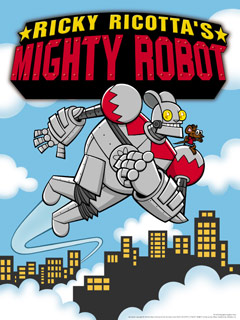 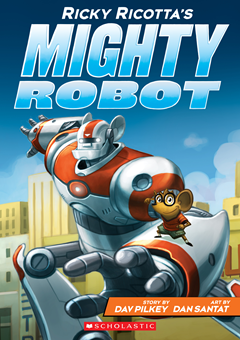 The books are based around a mouse named Ricky Ricotta and his mighty robot. Once an Episode, the duo defeats a Monster of the Week from a different planet in the Solar System coinciding with its Alliterative Name. (In fact, the planets are in order from closest-to-furthest from the Sun excluding Earth, which is where the first book's villain is from.) Each book ends with the villain being thrown into jail alongside the other villains in the series. The books also incorporate the "Flip-O-Rama" mechanism from Captain Underpants for quote-unquote "action scenes".

The series was formerly called Ricky Ricotta's Giant Robot, which Pilkey used when he published the first three books. Young readers were quick to point out that the robot was only giant in relation to Ricky Ricotta's size (if he is 12 times taller than a mouse, he's only about 2.5 feet tall) and suggested that the adjective be eschewed for "mighty", which Pilkey did.

After the Book o' Fun (also taken from Captain Underpants) was released, the series went into a seven-year hiatus. In October 2013, it was announced

that the series was due for a rebooting with a new artist, Promoted Fanboy Dan Santat, who not only re-illustrated the whole series but also illustrated two long-awaited remaining books not published during the Ontiveros era.