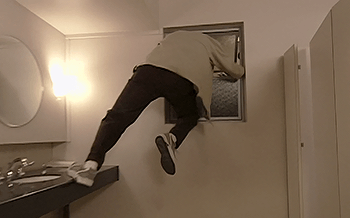 When you gotta go, you gotta go.
"No one ever goes into a movie toilet to perform a natural function. Instead characters use the bathroom to take illegal drugs, commit suicide, have sex, smoke, get killed, exchange money, or sneak out through the bathroom window."
— Ebert's Bigger Little Movie Glossary
Advertisement:

The heat is on and Bob is inches away from getting captured by the Big Bad. He has to find some way to escape, and fast, but he's trapped and there's a guard watching the entrance like a hawk, and the moment Bob shows his face, the guard will be on him like white on rice. So what does he do? He slips into the bathroom, naturally. Sometimes it takes a little haggling, especially if Bob's already been caught, but Bob eventually makes his way to the restroom where he has a moment of privacy.

Once alone, Bob makes his crafty, and usually narrowly executed, escape through the bathroom window, an air vent or some other really unlikely exit.

Related to The Guards Must Be Crazy. Usually requires a character to engage in Calling Your Bathroom Breaks. A character may also feign a Shy Bladder to get away with this. See also Balcony Escape. Contrast Locked in the Bathroom, where the intent is to stay in the bathroom. Compare Bathroom Search Excuse, where a character uses looking for the bathroom as an excuse for snooping. A common method of escape for those attempting to Dine and Dash.

After stopping to use the bathroom during a class trip to France that they've gotten sick of, Treasure and Rosie get the idea to ditch the class by escaping through the window.

After stopping to use the bathroom during a class trip to France that they've gotten sick of, Treasure and Rosie get the idea to ditch the class by escaping through the window.