Beast in the Maze 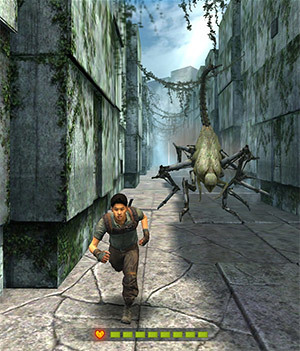 Now we know how the book got its name.
Advertisement:

The worst part about being lost in a maze is sometimes not the fact that it has so many twists and turns that look identical and at times seem to shift its corridors. What can really make them troublesome is that sometimes, they are the home of a vicious monster. A creature that prowls the labyrinth in search of prey, the entire maze its giant lair. Often, the creature isn't seen onscreen, with the only hints that something is living in there the bones of its victims, giant footprints, claw marks on the walls, Shadow Discretion Shots, and the occasional roar of something nearby. In many cases, this is to intensify the suspense of the one lost in the labyrinth, culminating in The Reveal Shot in which The Hero finally comes face to face with the monster.

Be warned. If the creature catches wind that someone is trespassing within its domain, it will continuously pursue its prey until either they manage to escape its lair or kill the beast. Usually in games, this beast ends up being the Boss Battle you'll have to win in order to escape. However, it is possible that the creature is too powerful for you to fight, and the only thing you can do is keep away from it; you'll die if it catches you.

This type of creature is a favorite to villains, who tend to confine monsters dangerous to even them to dungeons underneath their castles, while at the same time, employing a Trap Door to drop The Hero and his comrades into his pet's domain, thus prolonging their suffering as they feverishly try to find the way out (if the villain was stupid enough to put one innote alternatively, if the villain was smart enough to include an escape passage as insurance against being trapped with the monster themselves), while trying to keep from being found by the villain's pet.

In some frightening cases, the creature is smart enough to chase their quarry so that they'll run straight into a dead end and be cornered.

The types of monsters to reside in the labyrinths vary. It can be the classic Minotaur, a being of the giant insect family, something reptilian like a giant serpent or dragon, and even a sea monster if the lair is underwater. The beast is almost always an Animalistic Abomination or Dire Beast, but can be an Eldritch Abomination as well.

Can be used in a Trapped with Monster Plot, as well as complicating a Dungeon Bypass. Similar to a Dragon Hoard if the beast is guarding a vast treasure within the labyrinth. Similar to Abandoned Mine, especially if the beast's presence is a result of Dug Too Deep. Can be a variation of Sealed Evil in a Can, especially if the beast itself is searching for a way out. If the beast within the maze is a King in the Mountain, be careful not to invoke Awaken the Sleeping Giant. If the maze in question is a Pipe Maze or Absurdly Spacious Sewer, see Sewer Gator. If the maze is a Creepy Basement underneath a house, that makes the creature a Basement-Dweller. For beasts that are mazes, see Mobile Maze and Living Structure Monster. Similar to Isle of Giant Horrors where monsters reside on an island instead of a maze. For a wider range of monster dwellings, see Home of Monsters.

"The Lair of the Beast"

Sly ventured through a swamp-filled area that was home to a giant serpent known as the Beast.

"The Lair of the Beast"

Sly ventured through a swamp-filled area that was home to a giant serpent known as the Beast.