Video Game / Escape from the MindMaster 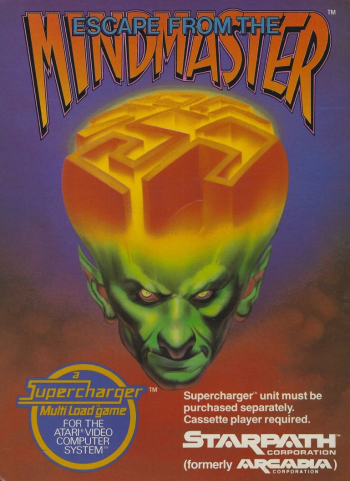 Escape from the MindMaster is a Faux First-Person 3D Maze and Puzzle Game for the Atari 2600, and considered one of the best 2600 games ever made. It was released in 1982 by Starpath for their Supercharger. Written by Dennis Caswell.
Advertisement:

An alien being called the MindMaster has kidnapped you and put you in a maze to test your intelligence and reflexes. On some of the walls of the maze are objects called "puzzle pegs", that fit into holes on other walls. You have to put each peg in its hole before the door to the next level unlocks. At some point, while searching the walls, you will encounter a Mini-Game that tests your memory or reflexes. There are six mazes.

The mazes are divided into a main hall and rooms. The puzzle pegs and minigames are in the rooms. There is a monster wandering around the main hall of the first five mazes, and if he bumps into you, you'll lose a chance. You'll also lose a chance if you bump into one of the force fields that slide from wall to wall in the rooms in mazes 2-5. You have either five or nine chances, depending on how you set the left difficulty switch. There is a constant beeping that tells you how far away the monster is, even if you're in a room. The rooms in mazes 4-6 have one-way doors. The last maze has no monster or minigame. It's an eight by eight grid of identical rooms, connected by doors, some one-way, some two-way.

Finishing a level before a counter runs out adds to your score. The minigames also add to your score. Whether you win or not, your score is tallied and you get a rating from the MindMaster. If you win, you get a screen that says "A Winner!", with music and fireworks.

Escape from the MindMaster provides examples of: