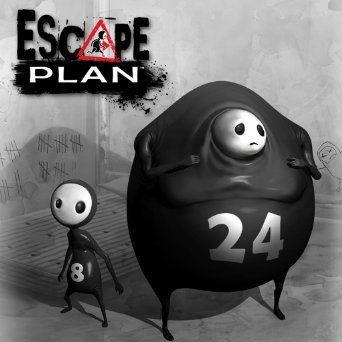 Introducing Lil and Laarg.
"The Plan: Help Lil and Laarg Escape by any means.
The Rules: Don't Die!"
— Debut Trailer

Escape Plan is the debut of Fun Bits interactive and a Play Station Vita Puzzle Game, later ported to PlayStation 4. It is the tale of the aptly named duo, Lil and Laarg, a pair of prisoners attempting to make it out from a labyrinth filled to the brim with deathly contraptions, murderous minions, and sheep. It is up to you to guide them, protect them, plan, poke, and prod your way to victory- one room at a time!

Known for its clever puzzles, unforgettable chiaroscuro black-and-white style, and much bloody, messy, and unexpected deaths, Escape Plan proves itself a puzzle game with the extra twist of allowing the player control of its two characters and also providing a direct way to interact with the environment with the use of both touchscreens in the vita, or the PS4 controller's buttons and touchpanel. Every level is a short room in which the player must navigate Lil, or Laarg, or sometimes both, from one end to another without any of them dying. Most of the time the player must directly modify the environment to make a temporarily safe path to survival, and get Lil/Laarg through in time, and in one piece. Said rooms vary greatly in difficulty, starting with a few simple ones that serve to introduce basic gameplay elements, and then slowly but noticeably start mixing and matching them to ever more difficult degrees, then introducing more new elements for good measure. It differs from many other modern puzzle games, in that figuring out how to get past a room is only half the challenge; oftentimes actually carrying out the plan is the most difficult part. This, coupled with unique controls and its artsyle, make Escape Plan one of the most unique game on the Sony systems.