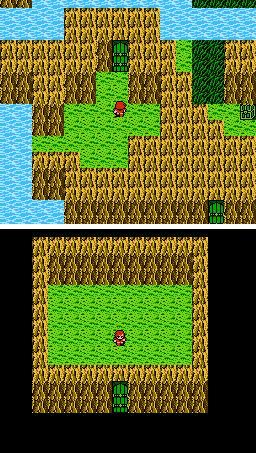 ...A NEW CAAAAAAAAR!
—oh. Never mind.
"Never provide a dungeon without treasure. The longer they search and find nothing, the more your players will be convinced that the treasure is bountiful and exceptionally well-hidden. If left unchecked, they will eventually dismantle and excavate the entire site in their search for loot."
— DM of the Rings XIX, "A Pinata of Stone,"

Over decades of play, gamers have been conditioned with the notion that there is no such thing as an "empty" room — The Law of Conservation of Detail demands that if a room is placed in a game, it must do something of value, be it a scripted plot event or NPC, Dungeon Shop, monsters to slay, Inexplicable Treasure Chests containing healing items or weapons/ammo, Plot Coupons to pick up, etc etc. After all, programmers and writers have limited time and money to do this, so they won't needlessly create a majestic cathedral and fill it with ... empty white space to distract the player from more important stuff. Plus, why torture those players out for a 100% Completion by adding loads of copy-pasted rooms with nothing in them?

The purpose of this trope is often to keep players on their toes, either by filling the room with enemies (essentially a trap room) or to get the above confused reaction. Players who run into enough consecutive Empty Room Psychs may overlook or ignore a new one, thinking there's nothing in it, which is of course the one that does have a goodie. Other times it is entirely unintentional, when the developers forgot to remove a room that was part of greater expansion. Then again, it could be the designers really do just want to give us a pretty room for the sake of it. In many video games, rooms or spaces like this serve the purpose of giving enemies a place to spawn out of sight of the player. In these cases, the room is empty when the player gets there, but served a purpose other than distraction in the design.

Now if you wander into an exceptionally large empty room, especially one with a nearby Save Point, this usually means one thing and one thing only: Incoming Boss Battle!

An Empty Room Until the Trap is a common cause of this. If not, you may be looking at a Sidetrack Bonus, lucky you. Keep in mind that if the empty room is a place within Player Headquarters, and it remains empty, regardless of how much progress you make, it may very well be a spot reserved exclusively for those players who have beaten the Final Boss in the Very Definite Final Dungeon, and have seen the Closing Credits.

Not to be be confused with the psychological study of being left alone in an empty room. When played for terror, see Nothing Is Scarier. See Cow Tools for a non-video game sister trope. Compare Missing Secret. Contrast Sidetrack Bonus.