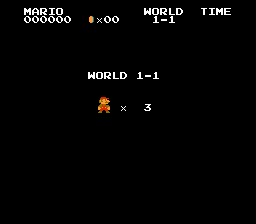 You have three. Don't waste them.
Advertisement:

Video Game Lives are basically how many tries a player has before a Game Over. They aren't as common these days, but were prevalent in the days of Nintendo Hard games, and are Older Than the NES.

Ways to lose a life:

This is based on carnival games, where you you got a certain number of tries before you had to pay to play again. This was then carried over to Pinball games, and continued in arcade games. When games were released on home consoles, the need for lives was largely removed (with the exception of games where the goal is to get the highest score and not to beat the game), but they were initially kept in as The Artifact and the punishment for running out of lives was changed from entering a new coin to starting the game over. Eventually a continue system also became more widespread so players didn't have to start from the beginning of the game when their lives ran out.

In time, the importance of lives diminished, which could first be seen clearly in PC first-person shooters, which started to utilize a save and load system. In the 2000s, many flash games removed the lives system altogether so they could increase the difficulty in their games without being as frustrating. In the late 2000s, this spread to commercially released games too. Despite this, many modern games still use the lives system.

When playing a game with high-stakes lives for the first time, a question looms as the player's lives start to dwindle: is the game displaying the spare lives the player has, or is their current life in the same pool? Finding that there is a "life zero" or "zeroth life" for the first time can be quite a relief.

Sometimes, a Plotline Death can lead to Gameplay and Story Segregation if it isn't explained why the extra lives didn't kick in at that point. Games that incorporate death into the gameplay beyond this trope provides example of Death as Game Mechanic.

Cheat codes and cheat devices are often a way to gain more lives (from several to infinite).

Modern video games generally do not have lives counters. They instead use a "one-and-done" health bar system (that can sometimes be increased), with infinite retries (it's the way that aspect is done that varies among games). Sometimes the lives counter is replaced with a deaths counter, to show how many tries it took to beat the game.

Not to be confused with Video Games Live, concerts in which classical musicians play video game music as directed by Tommy Tallarico.

Since this is a widespread trope, examples need to be explained in detail.