Video Game / You Only Live Once 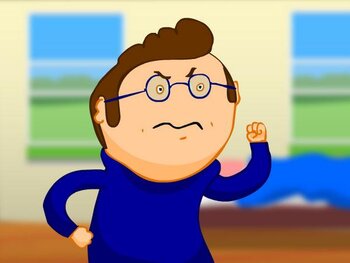 You Only Live Once Is a 2009 flash game by Raitendo. It can be found here

and on Newgrounds here

Jemaine, a 28 year old forester from Kent, England, receives a note in the mail from the evil Sir Giant Pink Lizard stating that his girlfriend has been kidnapped. Jemaine sets out to rescue his girlfriend.

The game's gimmick is that you literally only live once. Unlike most platformer games, if you die, you die for good. No extra lives, no one-ups, nothing. Instead, when you try to play the game again, you are treated to a series of animations regarding Jemaine's death (or, if you manage to beat the game, Sir Giant Pink Lizard's death). And you will never be able to play the game again. Ever.

Well, technically, you can replay the game by simply deleting your flash history, but shhhhh!! We don't need to tell anyone that.